My development of DXE went a long way since the beginning and it tried to cover all the content in which PvE players are interested. From the first cataclysmic 5-man heroics, through raiding instances to the last PvE season and its 3 Hour of Twilight heroics and Dragon Soul raid. And so I begun to look for other areas to which I could DXE extend and there was an area that had it coming for a long time. I present to You a new update:

The addon now contains mechanisms that allow adding battleground modules and currently covers all 8 battlegrounds. Each type of battleground is specific and DXE offers different functionalities for them. Excluding the granted suchs the precise timers for assaulting bases, graveyards and winner estimation timers you can also look forward to a brand new feature that will hopefully make many of you happy.

I personally never liked Blizzard’s score frame in battlegrounds and I found it barely readable. Now with DXE you have an alternative for finding out the battle state and hopefully make it more convenient. The score panel can be moved to a custom position after unlocking the DXE frames in addon’s options. 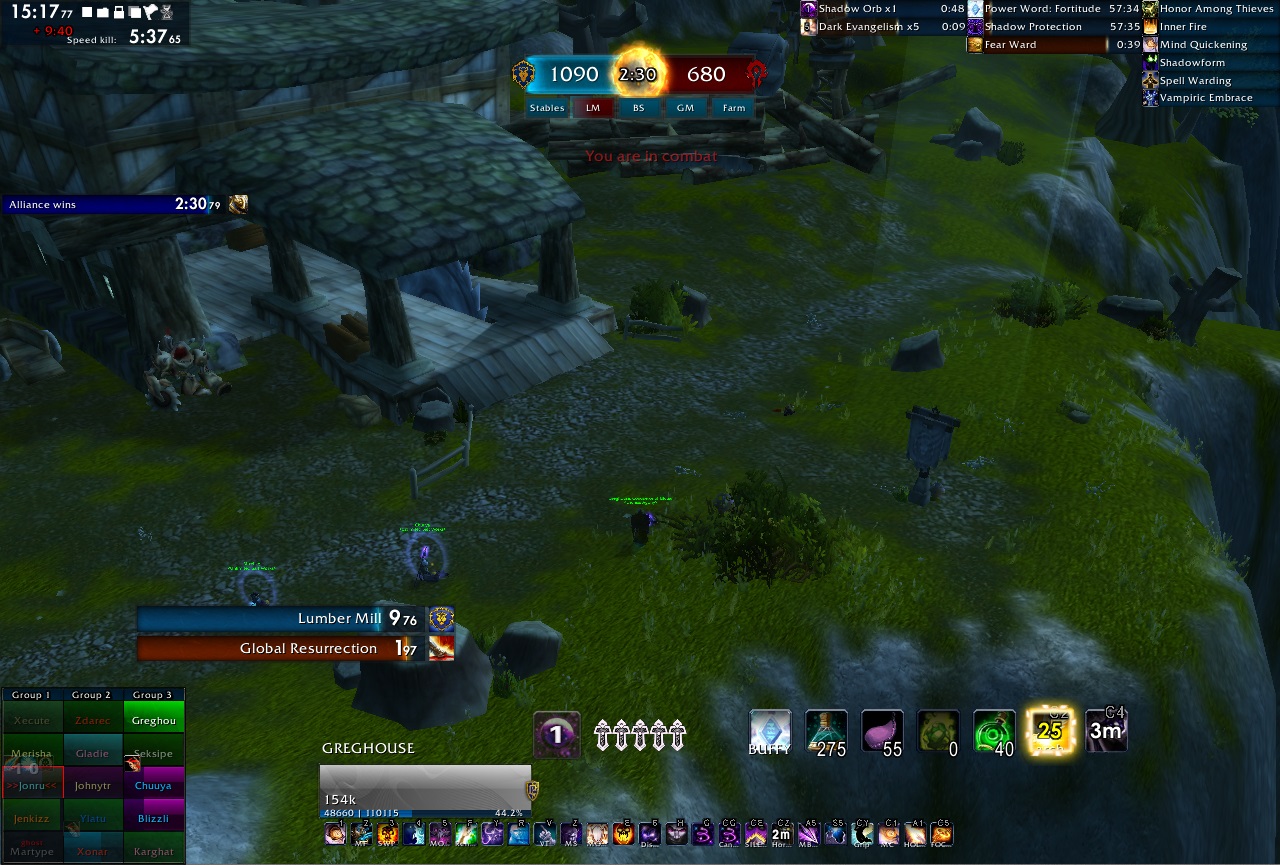 The main score panel contains the Globe Timer in the middle which counts down the most important event for the given battleground. In case of Warsong Gulch and Twin Peaks it show the 10-minute time limit until the battleground ends. As for Arathi Basin, The Battle for Gilneas and Eye of the Storm it shows the estimated time for one of the faction’s victory and for Strand of the Ancients it shows the 10-minute round timer for the Round 1 and the available time limit for Round 2. In the begenning of the battleground it also shows to countdown for battleground to start.

On Globe Timer’s sides there are panels displaying the current score such as the number of flags, points or Reinforcements in battlegrounds such as Alterac Valley or Isle of Conquest.

Under the main score panel there are special slots that capture the current state of bases and in battlegrounds with flags there is a slot for flag carriers. These slots can often be clicked and have special functions.

If the slot is for bases it sends a battleground chat message “Incomming > base name” upon clicking it. The idea is to make it more simple to call for help when the person is in combat and too busy to write a message himself.

If the slot is meant for flags it should target the flag carrier upon clicking it. Because of how the addons work there is a drawback which is that this functionality can’t be updated while in combat but rather after leaving the combat. Please don’t get mad if somebody takes the flag during the combat and targetting of the flag carrier doesn’t work. There is no better way to do it.

Although I believe many of you will like the Score Panel, you can always hide it leaving you with the original one.

Arrow to the knee?

Another interesting feature is the use of arrows in battlegrounds. In battleground with flags a flag will always point towards your own flag carrier if they’re in sight distance. That allows you to better figure out the situation  and tells you which way to go to the flag carrier. Unfortunatelly (and logically) the game doesn’t allow you to find out the postition of the other team’s flag carrier (at least I haven’t found the way yet) so the DXE can’t show you the arrow towards the enemy flag carrier – at least not yet.

The speed kill functionality works for battlegrounds too. It stores the shortest win time for both factions individually.

I would also like to mention that DXE since the version 3.2 contains a Global Resurrection timer that in battlegrounds counts down the time until the next global resurrection at the graveyards. The timer can be very useful because in certain situations it is better to get killed one second sooner and get resurrected a second after that than have to wait 25 more seconds. You can also time killing enemies so they have to wait the most until their resurrection. No to mention the fact that you know how much time you have left untill the dead come for you while taking the base.

There are a few other fixes as a part of this update since the last beta version 3.2 – 12 that have nothing to do with PvP such as:

This version of functions and mechanisms for battlegrounds is just basic and I believe there will be a lot of great ideas from all of you to extend or fix the DXE. I would as always appreciate your feedback. As I said many times: If you don’t complain nothing will change.