Deus Vox Encounters (DXE) is a very complex addon that even in its original form consisted of many things people might find interesting. In these past couple of years I have been building on top of these foundations, adding useful functions from other addons and implementing unique ideas that sometimes are and other times aren’t connected to the specific enivronment we play on at Twinstar be it the functionality of encounters, game’s client or even the game or the community players are part of.

In this article I shall try to write down most of characteristic features (the original and the brand new) of the DXE addon that are either important or make DXE different from other addons such as DBM or BigWigs.

Timer bars of both DBM and DXE are similar in principal but even here you can see couple of differences.

A part of followed unit’s names might be the raid markers that are places on them.

More types of bars have been added to display things such as:

Adds to the existing modules equally complex modules for other Cataclysm dungeons:

Blackrock Caverns, Grim Batol, Halls of Origination, Lost City of the Tol’vir, Shadowfang Keep, The Deadmines, The Stonecore, The Vortex Pinnacle & Throne of the Tides.

Implements mechanics, warnings, timers and other functions for all battleground that are available in Cataclysm:

Score Frame – Replaces the default Blizzard score that is shown in battlegrounds.

Usually it displays the relevant score with a timer in the midle which is counting down the most important thing in a given battlegrounds in a given moment. You can gen more information about it here.

Each and every timer and warning has (unlike DBM where you can only turn them on or off) its own settings such as: 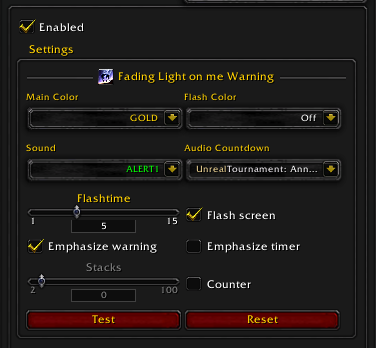 A part of individual settings is also an option to Test the look of a given timer or warning so the player can see how they look when they set it up and didn’t have to wait for the boss encounter. 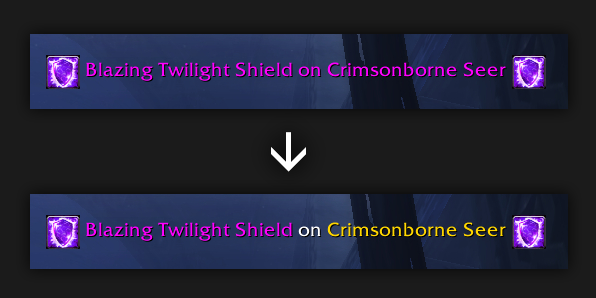 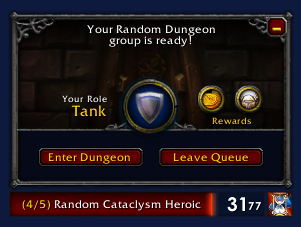 Automatic Cinematics Skipping – This mechanism allows you to automatically skip the cinematic that you’ve already seen at least once or you can set it up so you won’t ever see it or that it never skips for a given cinematic Given that DXE deals with dungeons and raids the feature only takes care of these cinematics (even though the game contains more of them):

In case of pre-rendered cinematics (so called movies) which can be seen for example in Dragon Soul you can play them back using Options in DXE wherever and whenever.

AutoGossip – In the Dragon Soul raid (and in other instances as well) there are many dialog windows that has to be confirmed, many npcs to talk to so that the things move on. Sooner or later the player might get bored confirming everything and might wish things were easier which is the purpose of this module. It automatically selects any pre-set gossip that can be found in raids and dungeons. The most common example is talking to Kalecgos after killing Hagara to move on with the role-play. With AutoGossip you only need to right-click the NPC once and it’s done. More extreme example might be the enabling of robot at Chimaeron in the raid Blackwing Descent where you need to select 5 gossips until the robot is enabled. With this module you only need to right-click once and everything is confirmed automatically. Of course there are gossips in Dragon Soul that pull bosses but these consist of confirming a separated dialog on top of the gossip so you can’t pull the boss accidentally by clicking on an NPC.

Hide Blizzard Boss Frames – Hide the default Blizzard boss frames that are displayed on the side during the boss encounter. Often enough people don’t make use of them and the frames only obstruct the UI.